I just purchased and read Bandstand Diaries: The Philadelphia Years. It sure brought back memories of a wonderful time in the 1950s.  Thanks for putting this book together.

Now, here’s my own story on being on the first show of Bandstand with Bob Horn, and how it changed my life. 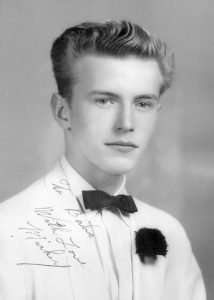 I was also a Bandstand Regular for four years – from 1952 to 1956.  I was one of many Kensington boys that made their trek to West Philadelphia Catholic Boys High School by way of the “El” and subway. The “El” was an interesting place early in the morning. There were the vagrants, homeless, a few early workers, and all these shining faces of these Catholic high school boys all dress in white shirts, ties and jackets.

If I recall, it took approximately 20 minutes for the trip from Kensington (Front and York Streets) to West Catholic High School (49th and Chestnut Streets). The trip was well worth it. We all got an excellent education.

I can still recall that day in October 1952, when my friends Chuck Downey, Frank McGuigan, Joe McMenamin and I as freshmen were leaving West Catholic high school to head home by way the “El”, when Brother John [The Principle] stopped us. Brother John said, “WFIL TV, which was within walking distance, called and they need some guys for a new TV show that is starting today”. We said no thanks, we in a hurry to get home. Brother John than added, that there were a lot of girls that showed up for the TV show and not a lot of guys. 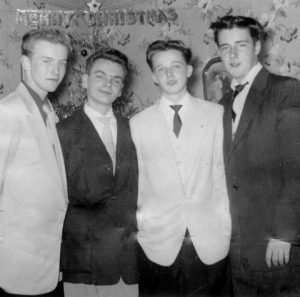 Well, that convinced us it was worth investigating further. Sure enough, there was about 10 guys and 50 girls that showed up at WFIL. This was the very first show of Bandstand. Naturally we stayed and continue show up every day after school for the next 4 years. We became Regulars on the show and were instrumental in helping to set up the format and strategy of handling the daily crowds at the TV station, and events like the Bandstand picnics at Woodside Park and Willow Grove. We also managed the autograph tables for the visiting stars each day. 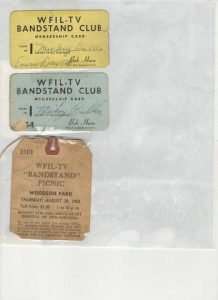 The Regulars were a great bunch of kids and friends I’ll never forget. I loved to dance – especially the spotlight dance. I was a very good jitterbug dancer. My dancing partners were Blanch McCleary and Babs Gwynn. We won many dancing contests. I remember the introduction of the Bunny Hop and Twist. I had such a good time dancing on Bandstand. The Bandstand picnics at Woodside and Willow Grove were great. We had so many fans greeting us as we traveled around the parks. But not everyone was friendly.  WFIL did have some security personnel follow us around the parks. 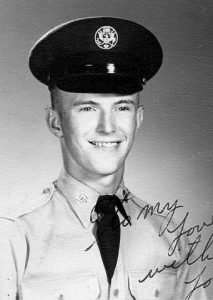 Fan mail was a daily event for the Regulars. I would receive hundreds of fan mail. I still have a few old letters from fans wanting information about Bandstand.  We, as Bandstand Regulars, got invited and even attended some of the WFIL company parties held at directors’ homes. 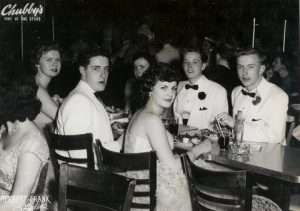 Babs Gwynn and I at Chubby’s Dinner Club in NJ after my prom in 1956. We married in July 1957. We celebrated our 60th anniversary last year.

I sure do enjoy reminiscing of those days in the fifties, when we would rush towards WFIL after school. Sometime we would stop at Pop Singer’s luncheonette and have a cherry coke with other Regulars before the show began.  Walking towards the TV studio, we would pass hundred of kids waiting in line. Boys on one side and girls on the other side of the main entrance. We felt so special, because we could walk up to the main entrance and Hank, the doorman, would wave us right in.

Dancing was our thing, especially jitterbugging. Since we were from the Northeast side of Philadelphia, we danced a unique swing style of jitterbug. We danced to Bill Haley and the Comets.(Rock Around the Clock & Crazy Man Crazy) We danced fast, swinging our partners from hip to hip and under our legs. We can’t dance as fast these days – but we still jitterbug about once a month at the Yacht Club today.

Chuck Downey, Frank McGuigan, and I (nicknamed “Mickey Bandstand” back then) were on the cover of the first Bandstand Yearbook released in 1955. I am the short guy next to Bob Horn in the photo. Bob is asking me to rate a record. The photo was also used as the cover of a very popular book called Bandstand the Untold Story . The book is a chronological list of events that led to the rise and fall of Bob Horn and the beginning of the Dick Clark era.

I never knew the book existed until my sister Joan, who lives in Florida, discovered it at a bookstore. I recently found my old friend Chuck Downing living and working in Vancouver, Washington. Barb and I had lunch him and his wife in Portland, Oregon last year and talked about old times. 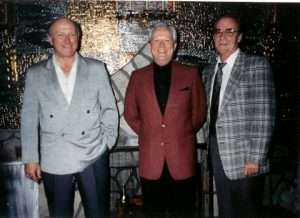 I knew Dick Clark very well during the four years I went to WFIL. He was a regular fill-in for Bob Horn. He would ask me and some of the other regulars to rate records on his Bandstand radio at WFIL. He was a great guy.

I had tons of memorabilia including autographs of singers and their photos. I stored them at my mother’s house in Philly. In the 1960s, she had a house fire and a lot of it was destroyed. I still have some autographed photos and some fan letters. 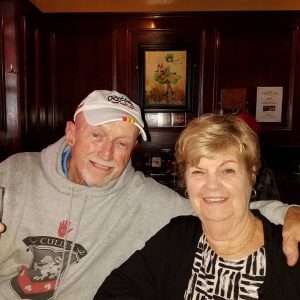 Celebrating our 60th anniversary in Ireland.