Let’s all go back to November of 1985. Thirty-three years ago…

Has it really been that long?  At that time, it felt like the entire city of Chicago and suburbs watched the Oprah Winfrey Show. 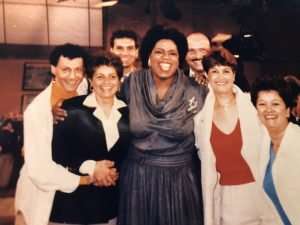 All the excitement started when Arlene Sullivan was interviewed by ABC Television.  She then received a telephone call from the Oprah Winfrey Show and was asked to appear as a guest. She requested that a few of the other Regulars accompany her. This appearance was a surprise for Dick Clark as he was celebrating “The 33-1/3 Anniversary Show”  in Pasadena, California. I was so lucky and thankful Arlene chose me, along with Carmen and Ivette Jimenez, Larry Giuliani ,and Bobby Baritz. It was agreed that Arlene would dance with Bobby, Ivette with Larry, and me with Carmen. 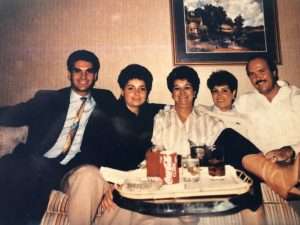 Arlene and Carmen flew into Chicago from Philadelphia, Ivette from Miami Beach, Bobby from New York and little old me from Newark, NJ. What a happy feeling arriving at Chicago’s O’Hare Airport. I loved being in the Windy City for the very first time.  I can describe the energy of Chicago being like a smaller version of New York.  There was the beautiful Lakeshore Drive, the Chicago Theater, elevated trains (just like in Philadelphia), magnificent skyscrapers surrounding the Chicago River, the Magnificent Mile, and much more.

After being met at O’Hare Airport by a chauffeur and a private limousine (what more can one ask more?), I waited for the arrival of the rest of the gang. We then piled into the limousine, laughing and being hysterical  – and as we were pulling up to The Drake I felt like we were arriving at The Palace of Versailles in France.

The Drake Hotel was built in 1920 at a cost of $10 million dollars ($120 million equivalent in 2018) with the opulence and furnishings fit for a palace. So this is what it feels like to be a celebrity, I thought to myself!

I think we were there for two or three nights. But, really, who was counting…

The first night, Debbie Dimaio, a producer,  dropped off call sheets for everyone.  A call sheet  indicates call times, emergency telephone numbers, and a list of all parties associated with that show segment.  Debbie had  asked us beforehand to bring along some memorabilia  to include in the Q & A section of the show, which we obliged. On the big day, all of us opened the show dancing our hearts out to “Runaround Sue” by Dion. 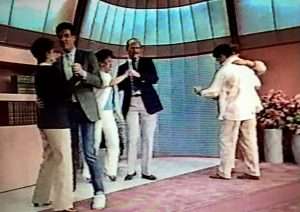 Of course, I got so carried away that I almost forgot we were there for Dick Clark.  To this day, I am not sure if Dick was really surprised by our visit. Did he have an inkling some of the Regulars would join him on the show?   Oddly enough, I have never checked with the other Regulars to get their feedback. 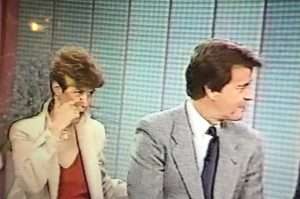 Dick introduced us one by one and then we were all seated in a row of chairs with Dick in the middle. The audience had questions for each of us including:  “What are we doing now?” (to which Dick interrupted by saying “they must have something better to do than follow me around  the country.”); Do we still dance? etc. I was kind of quiet and shy. Kari Clark was seated in the back of the audience and she really seemed to enjoy the show.  We met her afterwards. 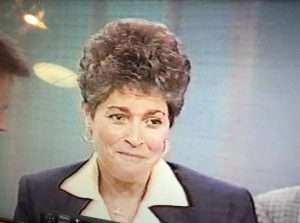 After Oprah we all took a quick stroll around the Magnificent Mile and adult fans quickly recognized us from our American Bandstand days and the Oprah Winfrey Show appearance that morning. It seemed like almost all of Chicago watched her show.

Oprah also had received a call from one of the fancy dance clubs in the city inviting us, the Regulars to celebrate our arrival in Chicago.  She kindly offered us the use of the chauffeured limousine and an extra night at the Drake for us to attend the celebration.  Little did we know that the show’s producers and Oprah went all out for our arrival.  There were Welcome banners displaying all our names and we were greeted by everyone with open arms. It was truly a special and unforgettable evening.

As we say, “all good things must come to an end” and so it did.

Arlene Sullivan, what can I say for inviting us to share this special occasion?!  Thank you is not enough!  As Bob Hope once said “THANKS FOR THE MEMORIES”!!!!!!!