By: Albert Koch of Dyer, Indiana 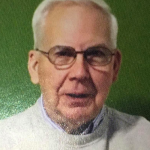 American Bandstand made its ABC Television network debut on August 5, 1957.  This five-day-a-week sock hop came to us live from WFIL Philadelphia in living black-and-white.  Hosted by Dick Clark, Bandstand presented the current heart throbs of the record business, played the hottest hit records and focused on the world of the teenager. 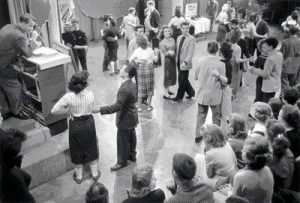 We immediately made American Bandstand part of our lives.  Along with listening to the music, we copied fads, adopted fashions and learned new dances from the Bandstand regulars.  Kids across America selected their favorite Bandstand personalities and sent fan letters and gifts. Those of us too shy or timid for such public idolization privately savored the sights and sounds of America’s daily dance party.  Thousands of teenaged girls swooned over Bob Clayton and wished they were his dance partner instead of Justine Carrelli.  Bob and Justine became one of Bandstand’s sweethearts.  Charter members of the eat-your-heart-out club were the guys who envied Kenny Rossi every time he slow-danced with Arlene Sullivan.

Almost single-handedly, Dick Clark elevated the status of teens and brought respectability to the world of the adolescent.  He also established the importance of teenagers as consumers.  Recording artists, record producers, sponsors and advertisers flocked to Clark’s doorstep hoping for a chance to display, promote and advertise their talent and products on Bandstand.

In the beginning, media critics panned the show, along with a warning that flaunting Rock ‘n’ Roll would corrupt teenage minds and lead to social decadence.  Television executives snickered when Bandstand was proposed as a network show.  They argued that no one would watch a “…bunch of kids dancing.”  The program, they continued, would be a colossal flop.  Dick Clark believed otherwise, and within a few weeks, several million teenagers proved him right!

From its initial broadcast on August 5th until November 17th, American Bandstand was a full two hours of dancing, interviews, chit-chat, Rate-a-Record, fan mail and music: 3 to 5 pm CDT.  So strong were Bandstand’s ratings that ABC inserted newcomer, Johnny Carson’s, Do You Trust Your Wife? /Who Do You Trust? show in the middle of Clark’s time period from 3:30 to 4:00 pm.  After which, Bandstand returned to the network from 4:00 to 5:00 pm.  Dick Clark signed off with his famous salute and “Here’s comes that mouse,” lead-in to Walt Disney’s Mickey Mouse Club which followed Bandstand. 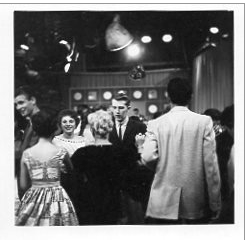 We watched Bandstand because it made us feel good about ourselves.  It also made us feel important in an adult world.  There was something special about seeing kids our own age become national celebrities.  We secretly wished it could be us.  Vicariously, through Bandstand’s regulars, we played out our fantasy scenes: dancing, chatting with recording and entertainment personalities, rating records, sharing interviews and receiving fan mail.  We pictured ourselves as a “teen-scene trend-setter” in fashions, fads, and new dance steps. We knew exactly how we’d act being interviewed or in the spotlight dance.   Contrary to the doom forecasted by a number of critics, Bandstand had quite the opposite effect on America’s youth.  The show that “…no one would watch,” ended up elevating the self-esteem and importance of countless young people and promoted positive social values. 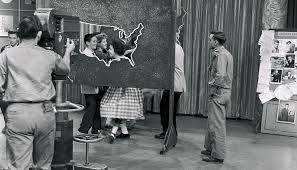 In 1957, as a 16 year-old teenager in small town America, Bandstand opened windows to a world I would not have seen.  By consuming my daily serving of American Pie, I was presented with new ideas, made aware of current trends, learned how much we had in common with one another regardless of where one lived, and enjoyed more fully—the adolescent years.  Those were fun, innocent days.  Without much sophistication, a substantial amount of naiveté, and the awkwardness normally present during the teen years, Bandstand lessened anxieties of the day, while Dick Clark gave kids a vote of confidence and assured us that being a teen was a neat age to be.

As usually happens, we grew up, graduated from high school and went about the task of building our lives. Watching Bandstand became less important.  As years went by, American Bandstand changed—and, so did we.  You cannot remain a teenager forever.  Still, remembering halcyon afternoons, sprawled in front of the TV, listening, watching and savoring the sights and sounds of Bandstand warms the heart and rekindles reminiscences of yesteryear.

American Bandstand was a vital part of those years, and I wouldn’t trade those moments and memories for anything!  To Dick Clark and everyone on Bandstand:  Thanks!   “It’s got a great beat and you can dance to it.”  I’ll give it a 95!