When talking about American Bandstand, there are several common questions that come up about what it was like behind the scenes. Here are some that Ray has answered for you.

The producers of the show, including Tony Mammerella, and Clark thought that kids under 14 were too giddy and hard to control. Kids over 18 were, to their way of thinking, too blase to take the show seriously; but more important, the age limit of 18 would keep uniformed soldiers and sailors out. It should be noted also that if you graduated from high school, you had to leave the show; most kids graduated when they were 17.

Why were teenagers not taken seriously before American Bandstand? 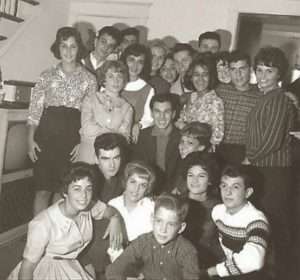 Teenagers were big news in the mid-fifties, they were not ignored. The difference was they were seen as rebellious and were threatening the country..i.e. juvenile delinquents. Teenage movies were about rebellion, BLACKBOARD JUNGLE, REBEL WITHOUT A CAUSE, YOUTH RUNS WILD. A Congressional investigation condemned comic books as a cause of delinquency. In 1944, teenagers (though not yet called that) had an estimated spending capacity of $750 Million. They, especially girls, became the target of Madison Avenue and, to some degree government. In the new world of emancipation and teenage demands (they had actually drafted a DECLARATION OF RIGHTS OF AMERICAN YOUTH  in 1937), stepped SEVENTEEN MAGAZINE (1944). It was geared to the growing gap and differences between teens and adults. American Bandstand did not discover the teenager; Dick Clark, who wanted to make money more than life itself, knew he had to diffuse this growing chasm to succeed and reap the benefits. He drew the kids back into the 40s making them wear suits and ties and pretty dresses. He presented a safer (less raw…compare Etta James to Connie Francis) rock’n’roll.

Did you know when the show started there were no sponsors? A popular brand even today was the first.

The first sponsor the show had was General Mills and its product Cheerios. Second was Clearasil. There were also Rice-a-Roni, Betty Crocker cookies, Bosco, Popsicles, Mounds and Almond Joy candies, 7-Up and Dr. Pepper. The commercials were targeted at the parents watching the show.

How much of an influencer was Dick Clark?

He jumped on Madison Avenue’s train; he started a consulting firm to inform companies what products they could sell to their new sub-group, teenagers. What the kids might have bought were Dick Clark’s All Time Hits, since teenagers were spending most of their money on music. And Dick earned extra money for every commercial he did. Dick bought interests in some of these companies. BTW, Dick’s drink was vodka and 7-Up.