MY TRIP TO PHILADELPHIA WITH FRAN (1959) 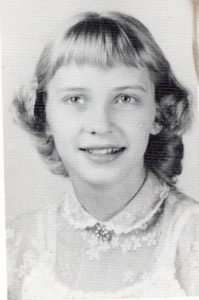 On the morning of June 26, 1959, Fran Priddy and I left Decatur, Illinois for a ten-day vacation.  Our destination:  Philadelphia, Pennsylvania, hometown of the Bandstand regulars.

On Sunday afternoon, we arrived in Philly, very excited, but still sort of scared, not knowing what the next week had in store for us.  We checked in at the motel, and then, since Pat Molittieri was expecting us, we went to her house to meet her.  A few of the regulars were there, and we were surprised at how much nicer they look in person.  I guess it’s their lovely coloring.  We were used to seeing them on black and white television. We were made to feel so much at home that we stayed there until around 10:30 p.m., though we’d only intended to stay an hour when we went!

The next morning we went to the Westminster Press, Fran’s publisher, and had lunch with the editor and the director of public relations.  They were very nice.  We had lunch at the Old Bookbinder’s Restaurant, and after having a delicious meal, Fran drove us to American Bandstand.  We went to Pop Singer’s drugstore and had cokes and talked to all the kids.  Fran was able to see and meet many of the regulars there.  I went on to the show with the others, and Fran said she would meet me afterward.  We met Fran as planned after the show and we ended up taking Bonnie Harden, Peggy Leonard and Joe Wissert home, as they live on the way to our motel.  Later on, Fran took me back to the Bandstand studio for the taping of the Thursday show.  I presented Dick Clark with the key to the city of Decatur and gave him a letter from our mayor.  After the show had been taped, we returned to the motel.  I think we fell asleep the minute we hit our pillows, as we had had a busy, exciting day!

Tuesday, Fran let me sleep until 10 a.m., though she got up earlier to do some writing.  I work up in a hurry, however, when I heard her dial a telephone number and say, “Pat?”  We made a date with Pat for that afternoon, then we spent the morning writing letters.  After going to the airport for lunch, we picked up Pat and headed for the home of her aunt, Mrs. Amelia Dick.  We spent the rest of the afternoon there.  Her aunt is just wonderful, a person whom no one can help liking.  I’m sure you know what I mean.  Then we returned to the Molittieri household for an Italian spaghetti dinner.  That was one of the most unforgettable meals of our lives.  Pat had a house load of people visiting her that evening, and you could tell she loved having them.  Bill Cook arrived soon after Bandstand, acting like part of the family, fixing himself a plate of spaghetti, etc.  Then Myrna Horowitz and Carol Higbee stopped in for a few minutes.  Peggy Leonard and her parents came over for the evening.  It was load of fun talking to everyone, watching them dance, and helping sort Pat’s fan mail.  At MIDNIGHT Bob Durkin brought a pizza, so we were really living it up!  There was so much going on that we didn’t leave until almost 3 a.m., but we didn’t feel a bit sleepy—I wonder why?

We spent Wednesday with the Darrows, some friends of Fran’s who live in a suburb of Philly, and had lots of fun watching their four pet monkeys play in the trees.  That evening the Darrows had a picnic for us on the shore of their pond.  Going back to the motel, we decided to stop and see what was going on at Pat’s.  We found that she had gone to Hy Lit’s TV show with Bill, but Mrs. M. welcomed us, and while we were talking to her, Pat called to ask her to come after them as they had talked to Hy after the show and were now out past Philly’s very strict curfew.  Bill was very nervous, especially as they kept encountering policemen, but the more jittery Bill got, the more of a joke Pat considered the whole incident.

Thursday we had lunch with Fran’s publisher again—only Pat was with us, too, this time.  When we entered the restaurant, Pat saw a picture of strawberry shortcake covered with whipped cream, and she decided she was going to have some, even if it meant cutting down on the rest of her lunch.  (The editor of ‘Teen magazine had arranged for her to do some modeling while in California, and she was supposed to lose five pounds first.)  She did get the strawberry shortcake too!  On Tuesday, Fran had given Pat a very real-looking, fur-covered fake mouse, and Pat decided she was going to surprise the publisher with it, and did she ever!  As we were leaving and the woman wasn’t looking, Pat put it on her purse, then Pat gasped and said, “What’s that on your purse?  A mouse!”  The woman looked and screamed.  It was embarrassing for her because we were in the middle of the restaurant and people were looking.  We all got a good laugh out of it.  Oh well, that explains why they aren’t publishing Fran’s books anymore!  (Just joking—BARBIE, the latest, is on sale beginning March 16, 1960.)

After leaving Westminster Press, we changed clothes and went back to Pat’s to watch TV, as that was the day the show taped Monday night was to be on, and everyone wanted to see me present the key and letter to Dick—that is, everyone but me!  When that part came on, I hid behind the chair Fran and Pat were in, and wouldn’t watch.  Mrs. M. thought I had fainted from the excitement of seeing myself and got ready to revive me!  Kenny Rossi stopped in for a visit that afternoon, too.

After the show, the kids began gathering at Pat’s house to go out to her aunt’s, for Mrs. Dick was having a barbecue so Fran could meet the regulars.  There were three carloads of kids on the trip out, and they were constantly yelling out the car windows to one another.  After we got there, there were many fields of activity:  dancing, eating, playing all, and swinging in the neighbor’s swings.  After eating, they started playing tag and every other game they could think of.  The party broke up around midnight, and after taking several of the kids home, we returned to our motel, dead-tired but still laughing about everything that had happened that day.

On Friday, Fran and I went to the zoo, and then Fran drove me to Bandstand for the last time.  So far I haven’t told much about Bandstand, do I’ll do that now.  I was quite surprised at how much smaller the studio is than it looks on TV.  Dick and all of the kids were the greatest; they couldn’t have been any nicer.  Pop Singer is a wonderful man, and it’s easy to see why everyone likes him so well.  I was in such a daze when I was there—I realized where I was, but I just couldn’t believe it!  It seems so funny to be in a strange city but to be seeing so many very well-known faces, as I neared Bandstand.  Fran picked me up after the show was over, and as usual, we took Peggy, Bonnie, and Joe home, hating to say goodbye to them.  Then after supper we were over to see the Molittieri family one last time.

Saturday morning we got up very early and left Philly.  We were sorry to leave and wished we could have stayed to see the Molittieri family board the jet plane to fly out to California the next Tuesday, but we didn’t feel as if we could go through another exciting week like that had been.  In fact, I slept quite a bit on the trip home, and Fran called me her “Sleeping Beauty!”

Well, that was my trip to Philadelphia with Fran.  I enjoyed reliving it for you and hope you did, too!